I got a Raspberry Pi, so, here's some rambling about it and what I've made with it.

First things first - the Raspberry Pi is weird. It's just funny having a tiny little computer that can do pretty much anything (that isn't terribly computationally powerful). I guess it's not too surprising, since mobile devices are already way more powerful (and nearly smaller) than the Raspberry Pi; but this thing feels a bit different, maybe because I'm actually able to program it..? (But then there's Pythonista, too. Maybe it's the ability to SSH into the box sitting on my desk?)

It's also just fun to look at. I took a picture of it: 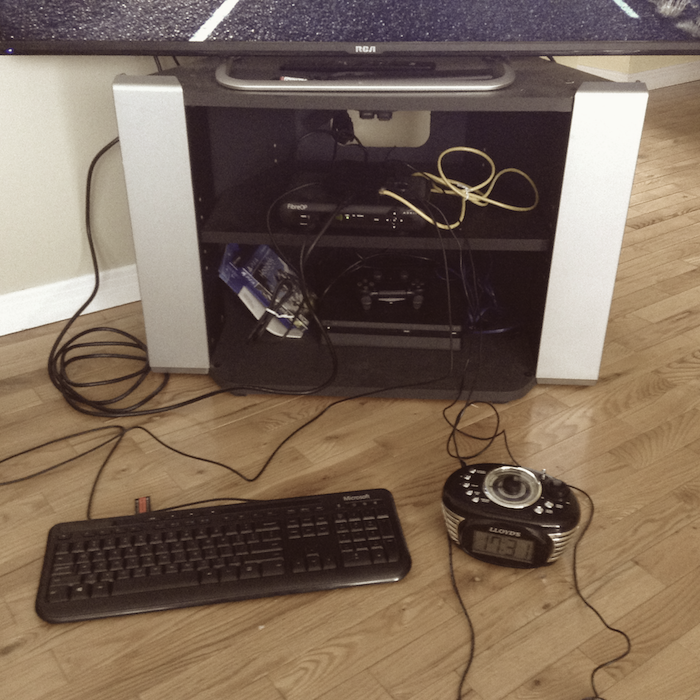 (That picture looks an awful lot like an album cover.)

Although my new setup is a bit less crazy (I got rid of the HDMI output, keyboard and mouse).

There's one distinct thing in that photo, though - the radio. I've got three reasons for using that radio, instead of the HDMI TV output:

Reason one: I don't want it to rely on HDMI, since sometimes HDMI might not be available.

Reason two: Radios give a nicer feeling. Having the radio speaker output sound seems more friendly than a gigantic TV (and/or a dedicated monitor) doing it.

Okay, but, what am I doing with it?

Long answer: it's downloading song files I have in my iTunes media folder and playing those. No files are stored on the Raspberry Pi (except for the currently playing track). I also made it be able to filter things by "group", which really just means by artist and (optionally) album.

..Ah, who am I kidding? This intro's way too long. I just want to show how it actually works!

The first thing we need to do is create a file containing all the songs and the URLs we can use to download them. I like using python3 -m http.server as my main static server, because it only takes that one command to use, so we'll try to parse the output of that.

Thankfully, the format for directory listings with that server is relatively simple; every <a> on the page links to a file or a deeper folder. Since we're building a tree of the entire library (root -> artists -> albums), we'll need to navigate the directory recursively; to do that we just run the crawl-folder function on every <a> href-path that ends with /.

There's actually a setting in the iTunes preferences that does all of that sorting for us - under Advanced Preferences, "Keep iTunes Media folder organized". That's enabled by default, I think. How convenient.

I wrote the program that crawls the python3 server in a separate file from the main play.js script; crawl-itunes.js. In fact, it doesn't require iTunes in any way; really it'll generate a tree for any python3 (or similar) server. (It probably won't work if the server gives parent-directory links, or if there's links; it isn't built to deal with potential infinite recursion, since that's not a problem in my case.)

Our playlist file essentially acts as a big listing of track titles and links to the HTTP download for respective files; we'll use it to pick our song. (That's what it's made for, after all!)

I went with the second option. The actual code behind it is boring, obviously, so I won't bother going over it; but in summary we really are just flattening the tree and picking a random item.

Also, now's a good time to mention the optional "group path" option I made for the program. If it's specified, the track-selector will only pick from tracks under the passed group. (Sub-groups are split by /; so, for example, you could make it only pick tracks from Epic Battle Fantasy IV by giving it the group path string 'Phyrnna/Epic Battle Fantasy IV'.)

Before we can actually play anything, we'll need to download the track we want. Just downloading the entire track before playing it works; the Raspberry Pi and the device with the iTunes library are on the same network, so there's no significant buffering.

Our picked track playlist-item conveniently stores two pieces of information: the title of the song[*] and the download link for it. Clearly we'll need the download link. It's just the HTTP URL we can fetch to download the track; so that's what we do.

[*] Really the text between <a href=".."> and </a>; not the actual title of the track that's stored in the file's metadata. I'm too lazy to figure out how to get that, plus I think some formats don't even have any metadata of that sort.

Before we can actually play the file, we still need to do one thing. Realistically, our files aren't going to all be in a format the play command we're using will accept; we need to convert them to a standard format, like WAV, first.

That's not actually difficult, though. We can use avconv[*] to convert the downloaded file using a child process; that's just avconv -y -i in out.wav. (-y is there to ignore any "should this file be overwritten?" prompts.)

[*] Originally I'd thought to use ffmpeg, but apparently that doesn't actually exist as a proper package, and avconv is the more standard fork people use. But it looks like ffmpeg and avconv work basically the same way, at least to the user; so at least I didn't also have to learn a whole new command-line program!

Playing the audio file is as easy as running the play command. In fact, that's what we do!

This step is actually that stupidly simple. It's literally just play out.wav.

And then we loop back to picking another track!

What else can this do?

I'd like to make a playlist file that somehow plays music from a YouTube channel that has tons of music uploads; SiIvaGunner and HeavyMetal Rocker1988 come to mind. That shouldn't be too hard to do, but it would probably mean either making an in-between server that downloads and responds with the downloaded YouTube audio (stupid!) or making the program work by downloading YouTube audio, directly onto the Raspberry Pi (not stupid).

Making it into an actual radio transmitter would be cool, too.