So I know it looks like I've abandoned the blog. As it would turn out, I haven't! ––

Okay, I guess I've abandoned the blog a little. But the second definition there certainly hasn't happened:

I've actually been looking for things to write about. I've had a little bit of trouble since I mostly haven't made very many things in the last couple weeks (wait, three weeks..? Sorry - really.), but I've made a few things now, so I can share those.

I wrote a bit of code for a Discord multi-user-dungeon/domain/whatever. It's almost definitely not going to go anywhere, but it's the first time I've really written any code in the last week or so, and I'd rathre not get rusty.

The test server isn't public right now, since that's all it is - a bot testing server. It's also kind of a collaboration with a friend of mine[*]; we haven't really figured out any of the story. At all. At all. We also have basically no experience with games like this, either (or really any multiplayer games), so this is really just a programming project for me, haha.

(* His online username changes every half-week or so, but right now it's lightblub. If you look for the user "alex" in this GitHub organization that he and I are a part of, you can probably find him. Hey, I'm not giving you instructions on how to stalk his every move, just a means of seeing all the cool projects he's worked on! SMILEY_FACE.)

I did a little bit of art? Not near as much as I wanted to, though. 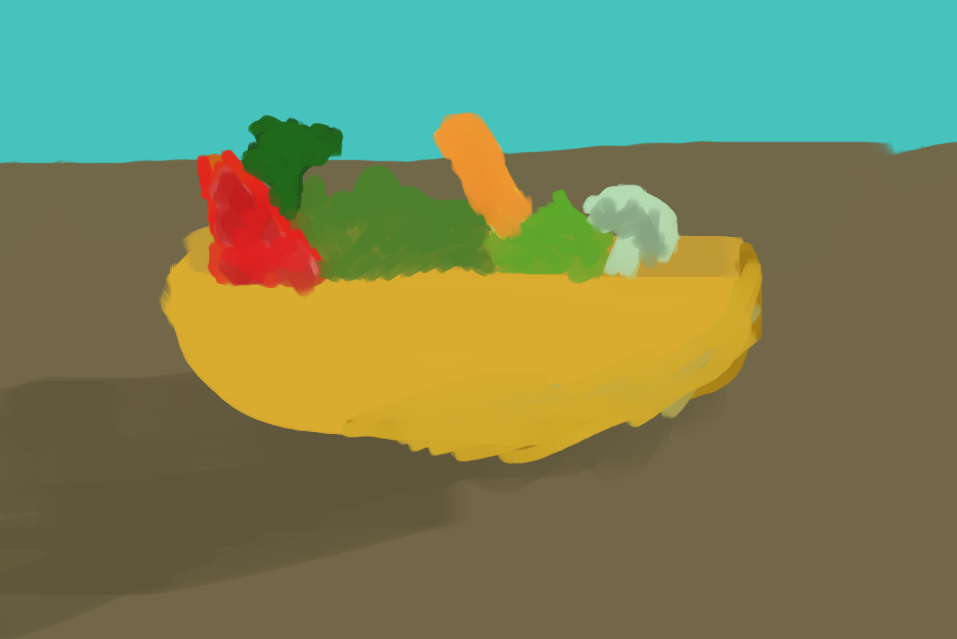 This drawing's supposedly supposed to be a picture of a bowl of fruits and vegetables and whatnot. Everybody else was drawing things without using any line art at all, so, I guess I tried to do something, too? It's not particularly good though!

I didn't work on the story.

I know - disappointing. I still like the idea for the story, but I didn't go far with it. That's kind of been how most of my stories go - and many of my non-writing related projects too, I guess. Maybe I'll pick up with the idea again eventually, since writing stories still sounds like a really cool idea to me, but I haven't really felt like it lately. The trouble is that I haven't gotten any ideas, any spurts of, "oh, this would work" - but that kind of stems from the fact that I didn't really bother thinking about it much. So! Again, maybe I'll work on it again eventually. When I feel like writing, I'll have a (bare beginning of a) story to go to, so, who knows? I'll probably see more of it, eventually.

Such ends the Quick(tm) update.

Since I know there's thousands of you readers dying to comment on my posts, it really doesn't take any effort - you can sign up for Disqus right through the commenting form at the bottom of all post pages, and that's not even necessary, since you can also use Google or Twitter just like that! (Or, ugh, Facebook.)